Published by The Kennedy Forum

Most health plans [1] are required by Illinois and federal law to cover mental health and addiction treatment on par with other types of medical conditions.[2] In other words, health plans cannot place more stringent limitations on coverage for illnesses of the brain. These requirements are broadly referred to as “parity” and are designed to reduce barriers and improve access to care for people with mental health and addiction conditions.

Despite these requirements, however, evidence from around the country suggests many patients have difficulty getting mental health and addiction treatment covered. For example, a patient survey conducted by the National Alliance on Mental Illness (NAMI) found that patients seeking coverage from private insurers for mental health services reported being denied coverage at a rate double those seeking coverage for other medical services.[3] And, data from the Connecticut Insurance Department shows that, in 2015, insurance plans there denied utilization review requests for mental health and addiction care at a rate one-third higher than they denied requests for other types of medical care.[4]

Medicaid managed care organizations (MCOs) have also been the focus of recent state and federal parity efforts. In March 2016, federal regulations were expanded to apply the federal Mental Health Parity and Addiction Equity Act of 2008 (MHPAEA) to MCOs, though Illinois’ parity law by that point already covered them. This spring, Tennessee lawmakers unanimously passed legislation to increase parity compliance transparency for that state’s MCOs by requiring them to report a range of data, including denial rates, that gets to the heart of whether plan practices are in compliance.[8]

The federal government also sees a clear need to increase parity compliance. A key part of the 21st Century Cures Act, which was enacted last December with overwhelming bipartisan support to help curb the nation’s ongoing opioid epidemic, aims to strengthen enforcement of the MHPAEA. Similarly, this August, President Trump’s Commission on Combatting Drug Addiction and the Opioid Crisis highlighted plan practices that it believes inhibit access to addiction treatment. According to the Commission, patients in need of addiction treatment are “often subjected to dangerous fail-first protocols, a limited provider network, frequent prior authorization requirements, and claim denials without a transparent process.” To address these treatment barriers, the Commission called for “robust enforcement of the parity law by state and federal agencies responsible for implementing the law.”[9]

In at least tacit recognition that coverage has been too hard to obtain, insurers have begun to change their practices to remove barriers to addiction treatment coverage. Cigna, Anthem, Aetna, and UnitedHealth Group have, for example, all recently removed prior authorization policies for medication-assisted treatment.[10]

The federal government has also made funding available to help states increase access to mental health and addiction treatment. The Centers for Medicare & Medicaid Services (CMS) has awarded Illinois and a number of other states grants to increase insurers’ compliance with existing parity laws. The Illinois Department of Insurance has committed to using this money to, among other deliverables, examine consumer and provider complaints trends relating to parity.[11]

Of course, improving compliance with parity laws is not a panacea to increasing access to care. Other non-parity barriers exist, including such things as the shortage of mental health and addiction professionals nationwide, the complexity of medical coding and billing, and the inadequate integration of mental health and addiction treatment with the overall health care system.

Why This Survey Was Conducted and the Need for Further Investigation

Nearly every stakeholder recognizes the need to increase access to mental health and addiction coverage. Yet, in Illinois, specific information is lacking about the extent of barriers to coverage of mental health and addition care. Certainly, there are anecdotal reports from Illinois patients and providers, but there is a need for more information. The best data source would clearly be claims data from health plans like the above mentioned data from Connecticut insurers. Such data, however, is unfortunately not available in Illinois because the state does not require its release, and it has yet to be provided by plans. Thus, in an attempt to increase the amount of information available, Illinois providers of mental health and addiction services participated in a survey on their experiences with health plan coverage. The results, as described in the next section, suggest that the experiences of Illinois providers broadly align with what has been reported around the country.

This survey of mental health and addiction providers was developed in late 2016 by a partnership of associations, community and legal experts, and The Kennedy Forum.[12] The survey was distributed by participating provider associations to their members in the last quarter of 2016 through the first quarter of 2017, and responses were collected online using Survey Monkey during the same period. Nearly 200 medical practices and organizations responded, including psychiatrists, hospitals, and community mental health and substance use disorder providers. The survey asked providers to report how frequently both Medicaid MCOs and commercial insurers denied for any reason certain types of mental health and addiction treatment—with possible responses of “never,” “rarely,” “sometimes,” “often,” “always,” or for several questions “N/A.”[13] The survey design did not require respondents to answer all questions, such as those that were not applicable to them (e.g. if the provider does not provide a particular type of service). As a
result of specific questions not being applicable to certain providers, questions presented in this issue brief have fewer responses, with no question receiving more than 100 responses.

As mentioned above, this provider survey was conducted precisely due to the lack of claims data available. Each provider response was self-reported, and providers that received the survey decided whether or not to participate. Thus, there is no guarantee that this sample of responding providers, which is significantly smaller than the population of all mental health and addiction providers in Illinois, represents all providers’ experiences. Indeed, response rates differed significantly by type of provider.[14] Another potential limitation includes the inherently subjective frequency response categories. Nonetheless, they do provide a relative scale for providers to give their perspective on how frequently coverage is denied. It is also important to note that a claim denial does not necessarily mean that coverage was not ultimately obtained. However, significant claim denials where coverage was later granted would still suggest problems likely exist that should be addressed.

Despite these limitations, we believe the results described below are a valuable starting point, offering a window into coverage of mental health and addiction treatment that we would not otherwise have. The results of this survey provide a foundation to aid efforts by plan administrators, providers, regulators, and enforcement authorities to identify and remove potential barriers to treatment, which could include anything from administrative problems in medical coding to plan practices that are more stringently applied to mental health and addiction care than to other types of care. This survey may be particularly useful in highlighting transition issues relating to Illinois’ ongoing expansion of its Medicaid managed care program. In the course of only a few years and in the midst of turmoil caused by the state’s budget crisis, Illinois has moved more than 1.8 million Illinoisans into Medicaid MCOs. Based on this survey, we urge stakeholders to gather additional data and dig deeper to uncover barriers impeding access to mental health and addiction coverage. The ultimate goal of all stakeholders should be to achieve seamless coverage of care for people living with mental health and addiction challenges. Doing so would not only lead to people leading more fulfilling, healthier lives, but also promises significant cost reductions for health plans and society at large. 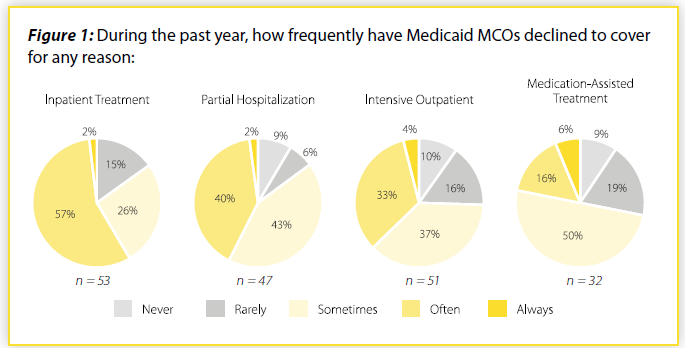 If these denials are more frequent than denials for other types of medical services, this may indicate potential non-compliance with federal and state law. These laws require most health plans that cover mental health and addiction care to pay for it using standards, processes, and procedures that are applied no more stringently than for other types of care. 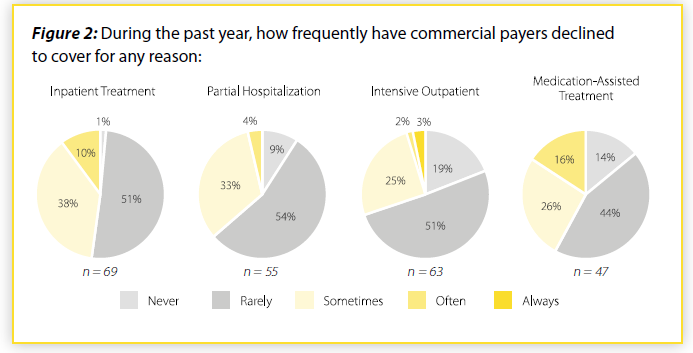 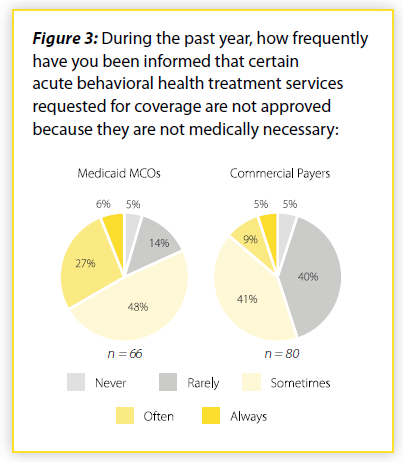 “Fail-First” and Other Barriers to Care

Other barriers to treatment exist beyond outright denials. For example, health plans can require that their customers “fail-first” on a lower-cost medication/treatment than the one requested by the medical professional. As shown in Figure 4, more than 7 in 10 responding providers reported that Medicaid MCOs sometimes/often/always require a patient to “fail-first.” Nearly 6 in 10 responding providers reported the same with respect to commercial plans. 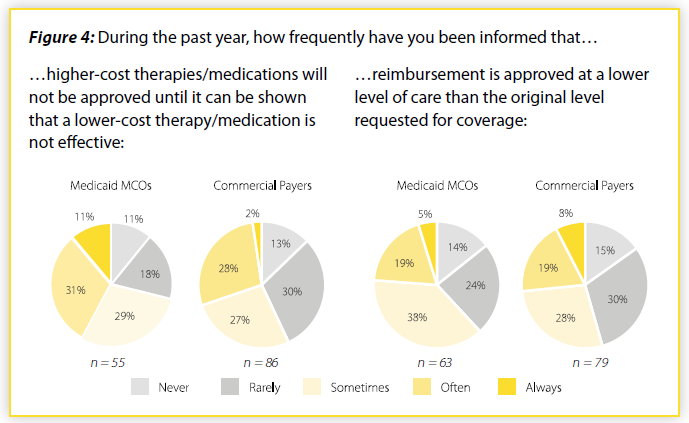 Again, if health plans are more frequently requiring patients to “fail-first” or approving only lower levels of care than they do with other medical conditions, this might be inconsistent with federal and state law. Plan administrators and regulators should closely examine practices to ensure that mental health and addiction care are not subject to more stringent review. Indeed, after investigating, the New York Attorney General settled with insurers to end discriminatory “fail-first” practices.[16] 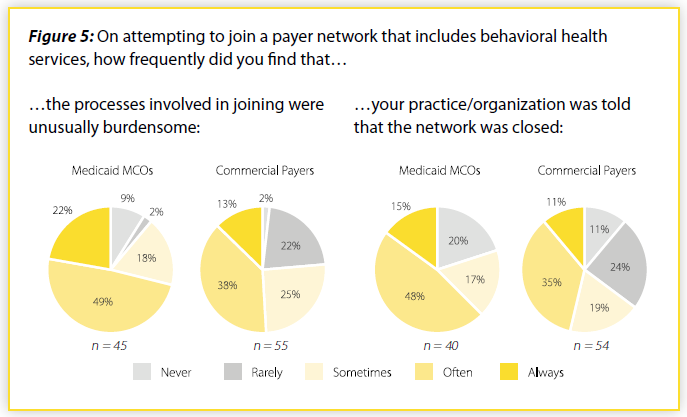 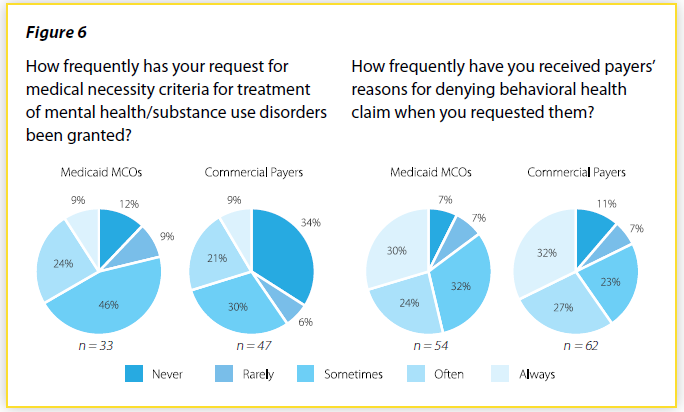 The following are steps that different stakeholders should take to remove coverage barriers and ensure coverage practices are consistent with state and federal law.

Public regulators should regularly review plan data, particularly with respect to denial rates of mental health and addiction care. It is critical that regulators ask about and compare the standards, processes, and procedures that plans use for mental health and addiction care and other types of medical conditions. This comparison is essential to establishing whether plans are in compliance with parity laws and should occur on a regular basis and whenever periodic market conduct examinations occur.

In Illinois, the Department of Healthcare and Family Services (IHFS) has regulatory authority over Medicaid MCOs, while the Department of Insurance (IDOI) has authority over many commercial plans. As part of the recent re-bid of the state’s Medicaid MCO contracts, IHFS should include reporting language like Tennessee’s directly in the new state contracts. At minimum, IHFS should ask MCOs to report on this information annually. IDOI should thoroughly review insurance plans’ compliance with parity laws prior to state certification, as well as review plans’ actual processing of claims through regular market conduct examinations. Finally, both IHFS and IDOI need to work closely with health plans to provide the necessary guidance in writing to assist plans in their compliance with state and federal law. MCOs, in particular, have indicated that receiving written guidance prior to regulatory changes would help them better anticipate problems and make ongoing transitions smoother.

State legislators should enact legislation that increases transparency by requiring health plans to report data and information necessary to determine whether plans are in compliance with parity laws.[17] Legislators also have a critical role to play in overseeing the work of regulators. Members of the General Assembly should ask questions to ensure that Executive Branch agencies are fulfilling their responsibilities under state law.

Providers should work with health plans to identify any administrative problems (e.g. coding issues) that might result in denials. Providers are also in a unique position to help inform patients of their rights and, when an adverse determination occurs, direct patients and their families to resources to help them appeal and potentially file complaints.

[1]Parity laws apply to all Medicaid managed care organization plans and to nearly all commercial insurance plans. However, these laws do not apply to Medicare.
[2]Frequently referred to as medical/surgical.
[3]NAMI, A Long Road Ahead: Achieving True Parity in Mental Health and Substance Use Care, 2015, https://www.nami.org/About-NAMI/Publications-Reports/Public-Policy-Reports/A-Long-Road-Ahead/2015-ALongRoadAhead.pdf.